Artists are making their mark in West Dallas away from the white walls of museums. They’re doing it through street art that showcases dozens of murals, many by women, people of color and others embracing the rebellious freedom of public murals and graffiti.

Muralist Hatziel Flores is one of them. Street art “welcomes everyone. It never discriminates,” said Flores, a Mexico City-born artist.

His latest work, a fusion of fine art and graffiti, features an indigenous woman in hues of purples and pinks with his Hatziel tag in cartoony lettering. It’s part of the curated cluster of work in West Dallas that has been expanding for years.

“Street art is an equalizer,” said Will Heron, organizer-curator of the latest two dozen murals, which were rolled out last month during the fourth annual Wild West Mural Fest.

“It is super important to me that there is a diverse range of viewpoints and styles expressed,” said Heron, an artist himself with a distinctive black-and-white style. “Graffiti-land can feel male-heavy. It makes me so happy to see the Wild West fest providing voice for male, female or nonbinary artists. It doesn’t matter what race you are.”

Graphic artist Angela Faz was conflicted, at first, about the mural fest. Faz grew up in West Dallas and has seen how gentrification galloped through the neighborhoods. But the opportunity proved irresistible, and the artist used it to tell the origin story of the Arkikosa River, the indigenous Caddo name for the Trinity River.

Faz painted a long fence in serene blues with the meandering Arkikosa River and a rising moon. A pottery vessel with rising smoke reads: “My name is Arkikosa.”

“I’m proud Dallas has something like this,” Faz said. “Art wasn’t something you saw growing up on daily walks around here.”

The social justice activism around the brutal death of George Floyd in Minneapolis last year advanced the issue of the treatment of Blacks and Latinos in all aspects of society, sparking street murals across the nation and the world and a sort of street journalism around injustice. Floyd, a Black man, was killed by a white police officer — an act caught on video.

Faz praised that movement for recognizing the many artists of color who merit attention and haven’t received it in the largely white male-dominated collections and exhibit selections of the museum and gallery world.

The artist praised the non-sexualized portrayal of women in many of the murals as a refreshing pivot. Others, Faz said, were simply inspiring in their use of composition, color, styles and themes, giving special praise to artist and filmmaker Jeremy Biggers for his positive portrayals of Black culture in large-scale murals in West Dallas.

Last year during the mural fest, Biggers painted a large mural of Black men and boys adjusting each other’s do-rags — a metaphor for the crown and for Black men caring for one another. This year, Biggers painted an arresting mural on Sylvan Avenue on the side of a building: “Legacy” pays tender homage to fatherhood and to his daughter Tesla, who’s 3 years old.

“Even when I am not around, I wanted something for her, like little bread crumbs around the city,” Biggers said.

That should happen. The work is on an established building that hosts many businesses, including an art gallery. The mural is designed to be permanent.

Nearly a decade ago, city officials persuaded key developers to allow legal graffiti on a set of warehouse walls on Fabrication Street. They call it the “free zone” because graffiti artists will largely be free from prosecution in an area where one of the biggest property owners, West Dallas Investments, has given its approval.

“My love of public art is because it is accessible to all and free,” said Heron, referring to the fact that there is no admission price.

Fabrication Street murals hold special spirit, Heron said. “There is no gatekeeper, no organization head and no one approving what happens in the free zone. It is a different level of freedom,” he said.

Stephanie Sanz’s mural of three pistol-toting cowgirls from an earlier mural festival sits on an old building and was cited as a must-see in a self-guided mural tour organized by the Dallas Museum of Art during the pandemic. “The cowgirls really put me on the map in Dallas,” Sanz said.

This year, the artist is back with spray cans and latex paint for a nearby Singleton Boulevard mural of two women embracing.

“My work is definitely about women and feminism,” said Sanz, who praised the Dallas fest for giving female artists a large showcase. “I like to portray women where they are in power.”

In his work, artist Daniel Yañez paid homage to the man he’s known for several decades as a hero and a genuine vaquero from Mexico.

The man is his immigrant father-in-law, who taught Yañez the importance of family and is a terrific teacher to a new generation: his grandchildren, the artist said.

The mustachioed, sombrero-clad Juan Gonzalez is featured in a mural on a metal warehouse door.

Each plane of his face and dress is divided into a different color with a pattern, and behind him are red and turquoise mountains and purple cacti.

“People like him don’t get any fame,” Yańez said. “I want to show who he is to the world. This is my way of saying what he means to the family.” 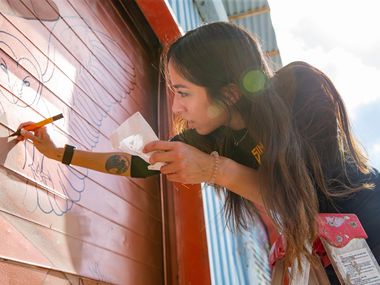 Tattoo artist Rose Rodriguez has a remedy for the pandemic-weary: Escapism. Rodriguez delicately stroked brown paint on a portrait of a Wichita Indian woman against a shimmery copper sky. Her vast canvas was metal, the front of a warehouse that sits around the corner from Dallas’ swelling outdoor gallery of graffiti on Fabrication Street just west of downtown. The work was part spray can, part house paint. “Art is very therapeutic,” she said, as she climbed off a silver ladder.

The music, joy and superpower of a multigenerational Latino family

Fri Nov 26 , 2021
In an age of big-screen superhero families like those of Marvel’s “Fantastic Four,” Pixar’s “The Incredibles” and DC’s “Shazam!” Disney wants to flip the script on viewers and put the spotlight on an ordinary 15-year-old Colombian girl, Mirabel, who struggles to keep her extended superhero family together as they lose […]