Tucker Carlson’s mother was a free-spirited artist who mostly disappeared from his life when he was six years old.

Instead, Lisa McNear Lombardi joined a crew of artists who hung out with David Hockney in the 1970s and 80s. Gay Times, a London quarterly, called her work “weirdly camp” adding, “We want the sculptures for our kitchen.”

Lombardi’s sculptures consisted of vibrant wooden oversized versions of everyday household items like peeled lemons and dice. She showed them infrequently. Eight months before her death from cancer in 2011, she had a joint exhibition with Vaughan at Redfern Gallery. Fame Magazine, a British music blog, described the show as “cheerful but disturbing.”

Born in 1945 into one of San Francisco’s wealthiest families, Lombardi McNear Lombardi was one of four children who spent her life running away from her privileged heritage. Her mother, Mary Nickel James, was a cattle baron heiress whose ancestors owned 3 million acres of ranch land across four states. Her father, Oliver Lombardi, was a prominent insurance broker.

While in college, she started dating Richard Carlson, a San Francisco TV journalist from a considerably less prosperous background.

They married in 1967 and within a few years they had two sons—Tucker, born in 1969, and Buckley, who arrived two years after that—and the family moved to Los Angeles. The marriage grew contentious, and when Richard was offered a job as a local news anchor in San Diego, he took his boys there while Lombardi stayed in LA and they tried to resolve their issues.

Soon, Richard sought a divorce and claimed Lombardi could not be trusted to supervise their children because she frequently used alcohol, marijuana, and cocaine, the New York Times reported. Lombardi and Carlson divorced in 1976, and Richard got full custody of their sons.

Several of Tucker’s friends from the time told Insider that they didn’t recall seeing Lombardi at the family home or at school events.

Lombardi stayed in Los Angeles where she befriended Mo McDermott, an LA-based British sculptor and longtime assistant to David Hockney, one of the most celebrated contemporary artists in the world. (McDermott is perhaps most well known for starring in Jack Hazan’s 1973 documentary “A Bigger Splash” that followed around Hockney and his friends.)

Soon, Lombardi became a member of Hockney’s entourage and was often seen at Friday night gallery openings on La Cienega Boulevard and Hockney’s Hollywood Hills home. (Hockney did not response to several requests to be interviewed.)

“She was more like a hippie, arty kind of person. I couldn’t ever imagine her being a mother,” Joan Quinn, then West Coast editor of Andy Warhol’s Interview Magazine, said. “She was very nervous all the time. She was never satisfied with what was going on, in terms of being a person, of being with people. She was ill-content.”

Lombardi and McDermott shared a studio in Hollywood before moving to a house in Echo Park. They collaborated on colorful wood sculptures of animals, vegetables, and trees.

They made a handful of pieces for Hockney’s hillside ranch and showed their works at several Los Angeles galleries, often with Hockney’s prodding.

Molly Barnes, who exhibited their work in 1983 and 1984, remembers Lombardi was “bohemian,” very ambitious,” and “somewhat withdrawn.”

“Hockney had me over to meet them. He wanted a gallery to handle their work,” she said “They were brilliant and David loved Mo. He thought they were the best artists around.”

“She had come from a lot of money and that reflected on her personality. She wasn’t a snob in any way but she had the manners of a private school girl. Someone who was fighting the establishment,” Barnes said. 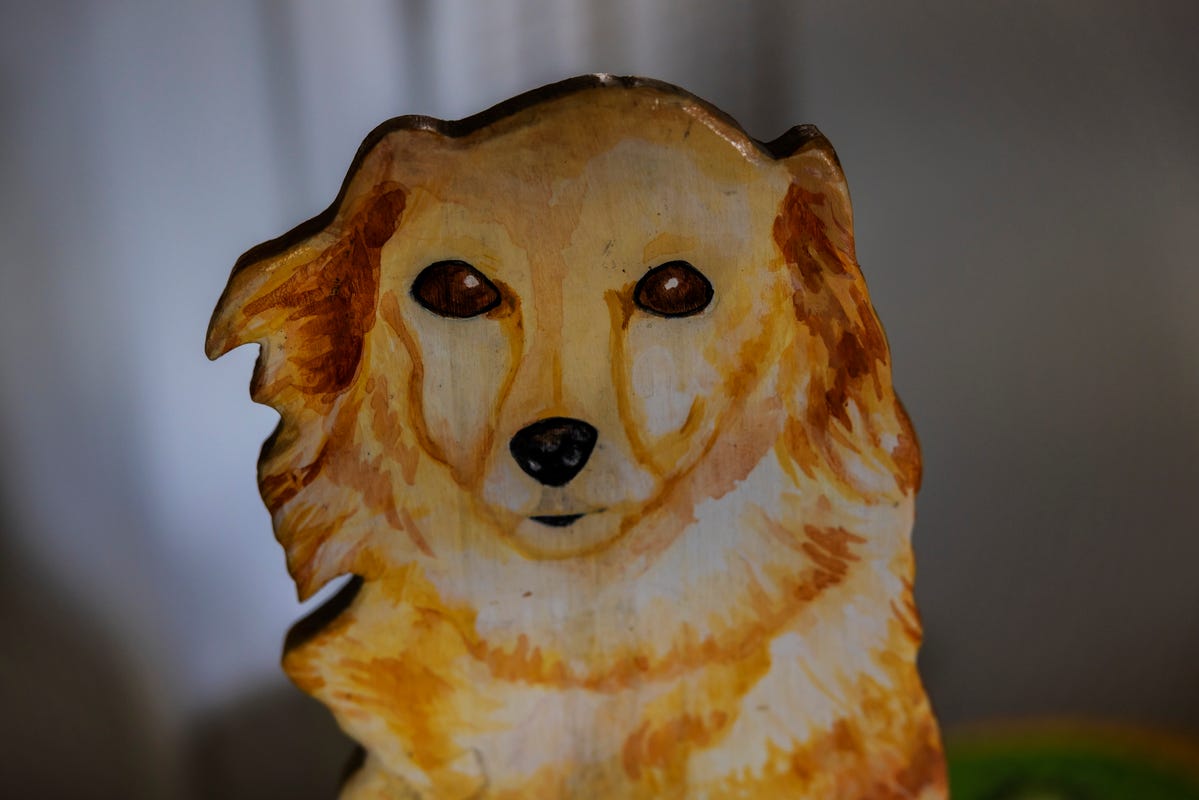 A sculpture by Lisa Lombardi and Mo McDermott that is part of Molly Barnes’ personal collection.
Ted Soqui for Insider 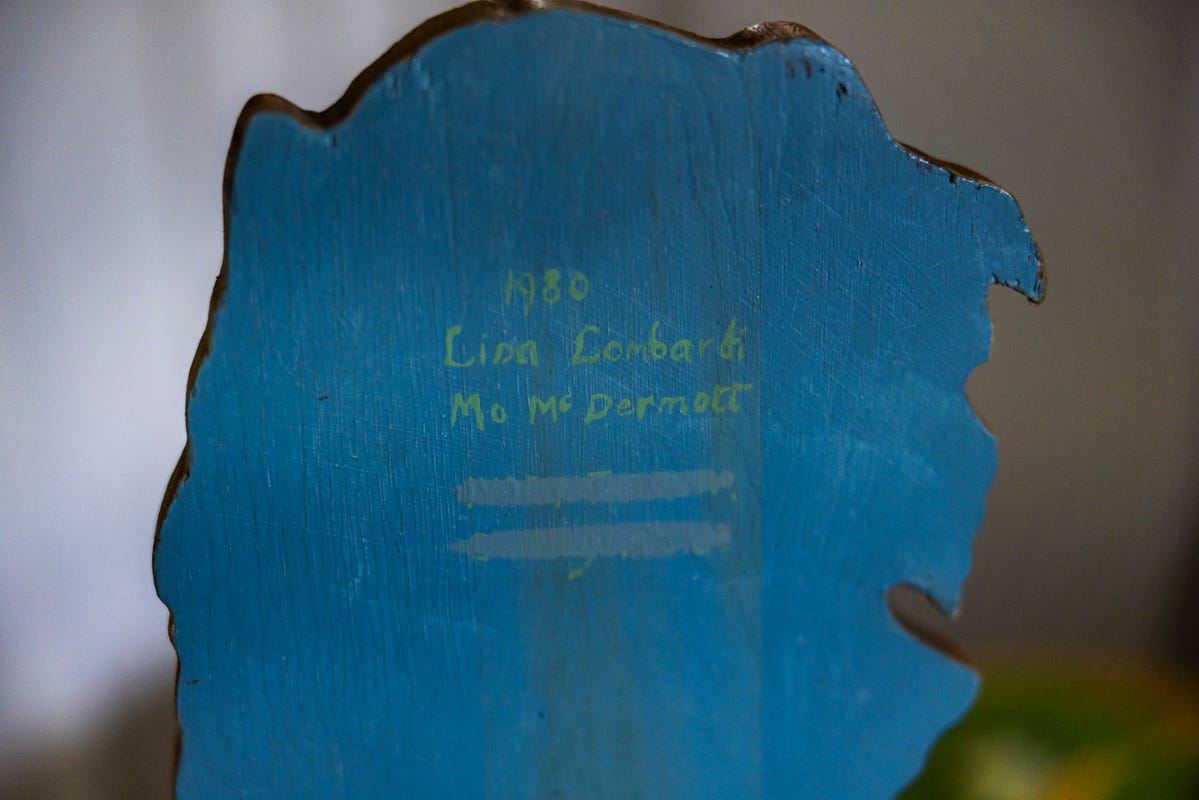 The dog sculpture seen from behind.
Ted Soqui for Insider

Lombardi and McDermott told friends they were married and the Los Angeles Times identified them as husband and wife in previews of their shows. Insider was unable to locate any record of their marriage. Some acquaintances believed McDermott was bisexual or gay.

The pair lived and worked together in a small Hollywood studio for nearly a decade but did not seem happy, friends said. Their arguments were “explosive” and both drank heavily. McDermott grew ill from alcohol consumption and died from liver failure in 1988, according to the Sunday Times.

In 1987, Lombardi met British painter Michael Vaughan, one of Hockney’s peers in the British art scene known as the “Bradford Mafia.” They married in February 1989 and for years afterward they would split their time between the Pyrenees of southwest France and South Carolina’s Sea Islands.

After her death, in 2011, it appeared that Lombardi might have disinherited Carlson and his brother. The protracted battle over Lombardi’s estate eventually went to the California Appellate Court, which allowed the Carlson brothers to keep their shares in 2019.

Several of Lombardi’s sculptures are still in Molly Barnes’s collection. Barnes believes Lombardi was overlooked since the contemporary art scene at the time was so male-dominated.

“Her work was viewed not necessarily as high art or fine art but with more of a crafts orientation, but look at all the fine artists working in ceramics and weaving today,” Barnes said. ” She had talent.”

Fri May 6 , 2022
‘Music at the Museum’ and Shinpei Takeda Music, Art, FoodThis Friday, Oceanside Museum of Art is holding a special music and lowrider festival, with music from Dezzy Hollow and street dance by Wild7s Freestyle Krew. Access to the museum is free, and the event centers on the “Oceanside Unfiltered” photography […] 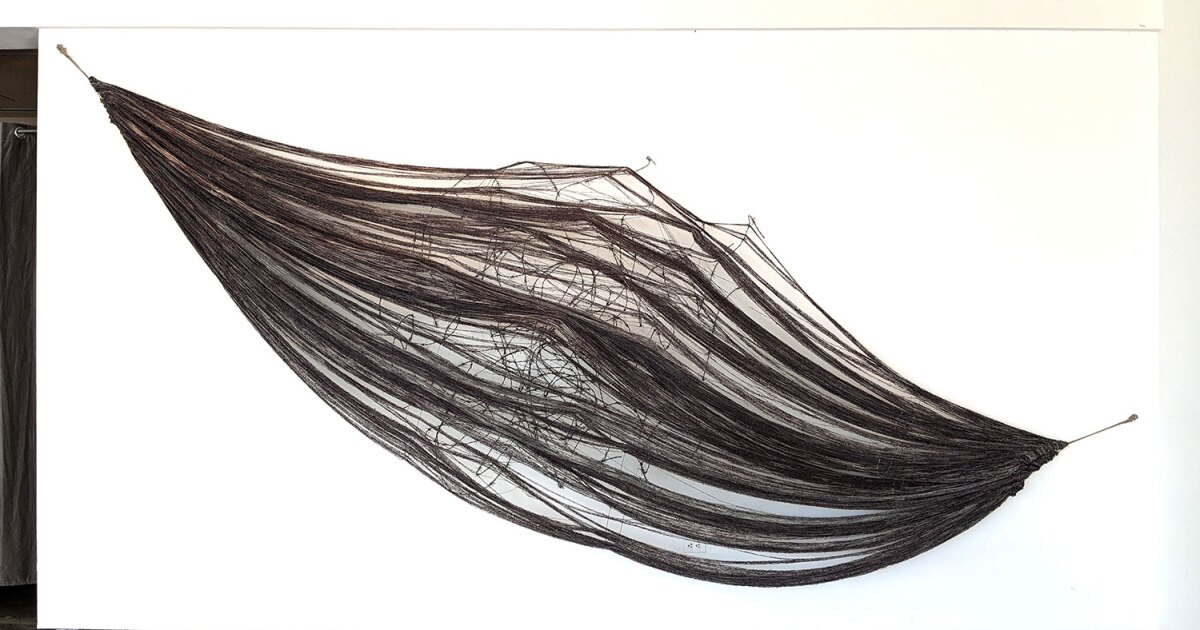