In 1971, when CBS broadcast the 1959 film “Ben-Hur” on television for the first time, more than 85 million people tuned in to view this Hollywood spectacular of friendship, betrayal, revenge, redemption and — of course — a thrilling chariot race.

One of the most-watched movies on TV in that era, the blockbuster film directed by William Wyler and starring Charlton Heston, Jack Hawkins and Stephen Boyd remains a popular Easter viewing tradition for many people. Its depiction of Jewish hero Judah Ben-Hur confronting the treachery of Roman friend Messala against the backdrop of Christ’s crucifixion continues to draw countless viewers each year.

However, that film — winner of 11 Academy Awards, including best picture — was not the first movie about this fictional story in the Holy Land. Two silent “Ben-Hur” films were produced in 1907 and 1925. The first one spawned a major lawsuit on intellectual property rights that went all the way to the Supreme Court, leaving a legacy that still affects the movie industry today.

“Ben-Hur: A Tale of the Christ” got its start in 1880 as a novel penned by former Union Civil War Gen. Lew Wallace, who played important roles at the Battles of Fort Donelson and Shiloh, as well as in the defense of Washington, D.C. It was the blockbuster book of its era, becoming one of the most popular of the 19th century — even surpassing in sales Harriet Beecher Stowe’s runaway hit “Uncle Tom’s Cabin.”

There were “waves of religious ecstasy that followed the publication of the novel, which is the most influential Christian book written in the nineteenth century,” stated Amy Lifson in “Ben-Hur: The Book that Shook the World,” an article she wrote for the National Endowment of the Humanities’ NEA’s Humanities magazine in 2009.

Wallace fended off numerous illegal attempts to coattail on the enormous popularity of his story. But many still managed to slip through in the days of looser copyright laws, including Ben-Hur Flour, Ben-Hur Cigars and even Ben-Hur Bicycles.

The novel also spawned a significant stage spectacular — licensed by the author — that involved live horses running on treadmills in the climactic chariot race. An estimated 10 million people attended this Broadway extravaganza and subsequent touring production, which ran for approximately 6,000 performances over 20 years.

Two years after Wallace’s death in 1905, the nascent film industry took aim at “Ben-Hur.” Based in New York City, Kalem Company began production without permission of a silent film by the same name (sans hyphen) featuring many of the ideas in the book, including the chariot race. The movie studio filmed that scene at Sheepshead Bay Race Track using off-duty soldiers of the 3rd Battery in Brooklyn in costumes supplied by the Metropolitan Opera House, as well as horses from the New York National Guard artillery unit.

The single-reel, 15-minute silent film premiered in theaters in December 1907. After an estimated 500 showings, it was shut down early in 1908 by legal complaints of copyright infringement. Henry Lane Wallace, the general’s son, along with the book’s publisher, Harper & Brothers, and the play’s producers, Marc Klaw and Abraham Lincoln Erlanger, joined efforts to challenge Kalem in court.

How Brad Pitt got banned — and Mickey Mouse nearly — from China

Silent movies were the Internet of the day: The industry was so new that many regulations governing other media didn’t apply to filmmaking. Lawmakers were lax at revising copyright rules to encompass this new form of artistic expression and commercial enterprise.

At the time, the publisher had control of the late author’s book. According to the 1909 edition of the Federal Reporter, the theatrical producers “caused the story to be dramatized, and Harper and Bros. duly copyrighted the dramatization and thereupon granted Klaw and Erlanger, the sole right of producing the same upon the stage.”

Hattie McDaniel was the first Black Oscar winner. It didn’t help her career.

The movie studio claimed its scriptwriter, who was working from a first edition of the book, had no knowledge of the copyright, which appears to have been granted just prior to the development of the stage play in 1899. In addition, attorneys for Kalem argued that the scenes in these moving “photographs” were a form of artistic expression and exempt from copyright protection.

A federal judge disagreed with the defendant’s assertions. On May 5, 1908, Judge Emile Henry Lacombe ruled Kalem had indeed violated the law by showing “moving pictures” of ideas taken from a copyrighted book and play.

The movie studio quickly appealed the decision, arguing the film was an exhibition of photographs, which was not specifically mentioned in existing copyright legislation. The defendant claimed only Congress had the right to regulate whether movie producers needed permission to portray scenes from a protected novel.

Judge Henry Galbraith Ward of the 2nd Circuit Court of Appeals didn’t buy that argument either. On March 16, 1909, he denied the appeal, ruling “that moving pictures would be a form of expression … infringing the author’s exclusive right to dramatize his writings and publicly to perform such dramatization.”

That decision set up a date with the Supreme Court. This time, Kalem pulled out the big guns. The company had joined forces with the Motion Picture Patents Co. (MPPC), a sort of cabal of movie producers who sought to protect their industry. MPPC financed this legal challenge, which was heard by justices on Oct. 21 and Nov. 1, 1911.

The defending attorney argued Kalem had not broken any laws because the movie studio had produced an entirely different form of artistic interpretation, since the images in the film constituted a new medium not covered by existing regulations. The defense also hinged on the fact that Kalem had not caused the film to be shown; rather, it had just created the product, which was exhibited by others.

The Supreme Court was not impressed. In a unanimous decision, Justice Oliver Wendell Holmes Jr. declared on Nov. 13 that Kalem had created “an unlawful dramatization of the novel,” ruling that when a copyrighted story is told with moving pictures, “they are used to infringe a right which the statute reserves.”

Holmes also shot down the argument that Kalem was not at fault because it had not actually shown the films in theaters, citing as evidence a studio-financed marketing campaign intended to attract viewers to the showings.

“The defendant not only expected but invoked by advertisement the use of its films for dramatic reproduction of the story,” he wrote. “That was the most conspicuous purpose for which they could be used, and the one for which especially they were made.”

MPPC paid a $25,000 fine, which made “Ben Hur” the most expensive film ever made at the time. In addition, the court ruled that the movie be destroyed. Fortunately, a copy was later discovered and donated to the Library of Congress. It can be viewed here.

Is radio in a second golden age? Here’s what the first looked like.

The “Ben-Hur” saga would surface again in film with another silent treatment in 1925. It was also a huge success, becoming MGM’s highest-grossing movie of the year. It was re-released in 1931 as a sound film with a musical soundtrack and sound effects. The Wallace family had sold the film rights to Erlanger for $600,000 (about $17 million today); Erlanger then offered them to Samuel Goldwyn in 1922 for a reported $1 million plus half the gross, making this version of the film the costliest ever made in the silent era.

MGM retained the rights for the 1959 production starring Heston. At $15 million, this “Ben-Hur” was the most expensive film of its era. With worldwide box office receipts of about $100 million, it remains one of the highest-grossing movies of all time when adjusted for inflation.

“Ben-Hur” was remade twice more: into an international miniseries in 2010, which was well received, and into another movie in 2016, which was panned by critics, who asked a version of the question: “Why mess with a classic?”

The impact of the Supreme Court ruling continues to be felt in Hollywood today. In the book “The Ancient World in Silent Cinema,” Jon Solomon writes that it had a beneficial influence on the movie industry, contrary to Kalem and MPPC’s concerns: “The legal use of copyrighted properties flourished, and competent screenwriters would now become important components of the filmmaking process.”

For more than a century, that decision has been cited in numerous court cases — concerning everything from Mickey Mouse watches to digitally downloaded music.

SUNY-ESF student turns hobby into business with The Pits Vintage

Mon Apr 18 , 2022
Get the hottest Syracuse information shipped proper to your inbox. Subscribe to our e-newsletter below. Paul Sausville’s place at dwelling was entirely comprehensive — a bulging closet, stacks of dresses in every single corner, even boxes in the basement mainly because his enthusiasm for classic items could not in shape […] 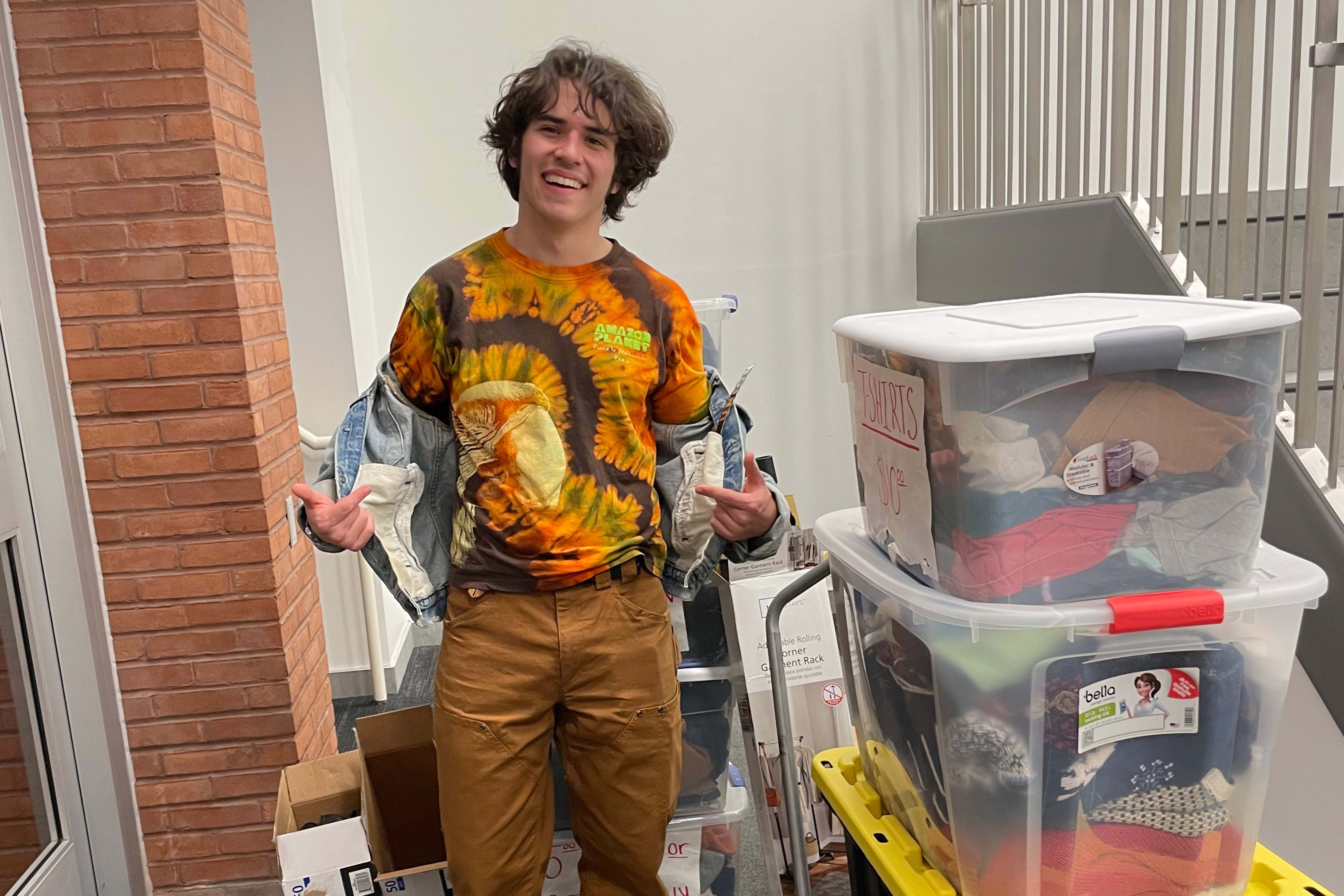