— Trial starts today for an actor accused of staging a hate crime attack to further his career. Jussie Smollett claimed to be a victim almost three years ago and then defended himself on TV when speculation started to grow about his story. The case led to him being written off the Fox hit “Empire.” Two brothers who worked as extras on the show allege they were paid to fake the attack and are expected to be key witnesses. Trial is expected to last a week. Smollet faces up to three years in prison if convicted of disorderly conduct.

— The fashion world and celebrities are mourning the loss of designer Virgil Abloh. The 41-year-old founder of the Off-White label succumbed to a private battle with a rare form of cancer. Tributes are pouring in, with producer Pharrell Williams calling Virgil a “kind, generous, thoughtful, creative genius.” Drake posted a series of photos with Virgil in part writing “love you eternally brother.” Hailey Bieber commissioned Virgil to design her wedding dress, writing he “was someone who always brought life, charisma, love and fun to any situation, and every room he walked into.”

— Matthew McConaughey says he won’t be running for governor of Texas. The actor took to Instagram on Sunday, saying he’s taken the past two years to find out how he could be most useful “in this life.” He explained he did a lot of thinking and research on politics in Texas and America before making his final decision. Bottom line, he learned America needs to start shining a light on our shared values, the ones that cross party lines.

— A new book claims Prince Charles questioned the skin tone of any future children of Prince Harry and Meghan Markle, an incident that hastened the couple’s split with the royal family. Christopher Andersen’s book “Brothers And Wives: Inside The Private Lives of William, Kate, Harry and Meghan,” quotes a source that it came up the morning Harry and Meghan announced their engagement in 2017. Charles reportedly talked about it with his wife, Camilla. The book goes on to claim that Charles’ comments were twisted by royal advisers to make it seem racist by the time it got to Harry and Meghan. A spokesperson for Prince Charles calls the entire story fiction and not worth further comment.

— Comedian Dave Chappelle says he’ll decline his former high school honoring him if his critics donate more money than his supporters kick in. Chappelle laid down the challenge on social media over the weekend following backlash over his comments about the trans community in his Netflix special The Closer. He posted pictures of him visiting the acclaimed Duke Ellington School of the Arts in Washington, DC. Chappelle asked people to make donations to the school and note whether they favor or object to the school’s theater being named after him in April.

— A pretrial hearing will be held Tuesday at the Van Nuys Courthouse for the television producer accused of drugging and murdering her sister in 2015. Prosecutors say 59-year-old Jill Blackstone faces murder and animal cruelty charges in connection with the death of Wendy Blackstone. The 49-year-old victim’s body was found inside an enclosed garage in Studio City where carbon monoxide filled the room. First responders also found a dead dog next to Wendy. The defendant is also accused of writing a phony suicide note. Blackstone produced several TV series — including “The Jerry Springer Show” and Sally Jessy Raphael’s program.

— Lindsay Lohan is getting married. The 35-year-old actress revealed on Sunday morning that her boyfriend, Badar Shammas, popped the question. The couple showed off her ring and celebrated the happy moment on Instagram. The Mean Girls actress and Dubai-based financier sparked a romance back in early 2020.

— Kiera Knightly is currently in isolation after coming down with COVID-19. The actress told Stella Magazine that she, her husband, and their children are battling the virus. She said she was feeling “pretty rubbish” but her husband, James Righton, is asymptomatic. She says their daughters are actually recovering from the virus faster than she is.

— Reality real-estate agent Christin Quinn is slamming critics who say she faked her pregnancy. The Selling Sunset star used season four to show off her pregnancy and life as a new mom. She posted an Instagram story of the weekend, which has since been taken down, firing back at people who accused her of using a surrogate. Quinn has gone into detail about her son’s arrival, which prompted an emergency C-section.

–Deadline reports that NBC’s coverage of the Macy’s Thanksgiving Day Parade drew a total of 25.4 million total viewers and a 6.4 rating in the adults 18-49 demographic on Thursday across the live broadcast and encore immediately after, according to Nielson fast national data from NBC. Those numbers are pretty much consistent with last year’s coverage of the event, which was virtual due to the COVID-19 pandemic. However, the network claims the 5.5 rating in 18-49 and 21.7 million viewers for the live broadcast are the best numbers for any entertainment telecast of 2021, and the most since last year’s live parade telecast which scored 21.98 million viewers and a 5.8 rating…

–Seth Meyers, host of NBC’s Late Night, revealed on Thursday that he and his wife, Alexi Ashe, secretly welcomed their third child, a daughter named Adelaide, back in September. Meyers, who continued his Thanksgiving show tradition of having his parents, Hillary and Larry Meyers, and brother Josh Meyers on as guests, delivered the news via a video of Meyers and Ashe’s two elder sons — Ashe, five, and Axel, three — in matching turkey costumes. They counted down to reveal their baby sister in her own turkey suit. Meyers’ mother shared the newborn’s name, emotionally noting that her granddaughter is named after her own mother…

–Lisa Brown, the TV soap opera actress best known for her rolls on Guiding Light and As The World Turns, died on November 24 at age 67, according to Deadline. The cause of death was not revealed. On Guiding Light, she played Nola Reardon from 1980-1985, and while working on the show she also starred in the broadway adaptation of 42nd Street. On As The World Turns, Brown held the role of Iva Snyder from 1985-1994…

Wed Dec 1 , 2021
Gathering to pay tribute to departing Warner Music Canada head Steve Kane and his wife, Debbie Rix, at Toronto’s famed Horseshoe Tavern on Friday night was a large chunk of the city’s music biz elite. They congregated in what seemed like the first large in-person gathering of the clan in almost […] 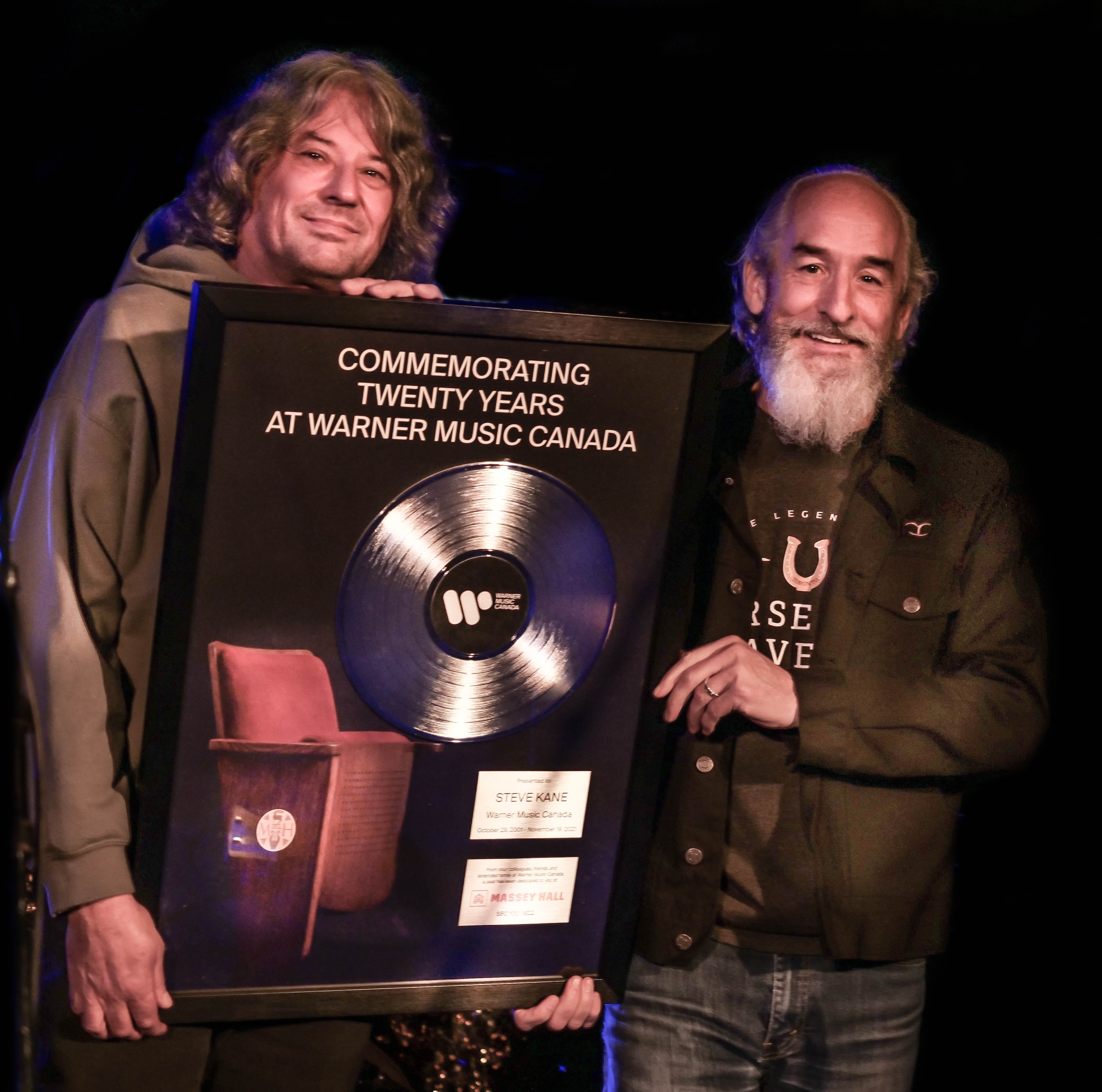